The Golden Coast Adventure Faire has selected the IORG Sacramento Camilla assembly #108 to receive financial gifting from a raffle we are holding. As a 501(c)(3) organization, any donations made are tax deductible. Please consider a donation to this worthy charity.

The following items have been donated from generous benefactors, including:

An original sketch of Iron Man signed by Tom Morgan: 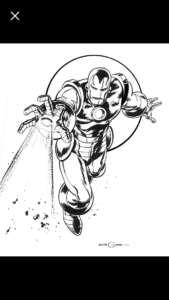 TOM MORGAN is a veteran Marvel Comics artist that has drawn Spider-Man, Iron Man, Captain America, The Avengers, The X-Men and The Punisher among other characters from 1983 to 1999.

He now draws storyboards for animated film and television shows for companies including Warner Bros., Nickelodeon and Walt Disney Animation.